Day one of the three day Newport Folk Festival has only just ended, but boy has it been a real treat. Having gone to Firefly Music Festival in June, it was an extraordinarily nice change of scenery. Fort Adams is the absolute perfect venue for a small, intimate festival, which is exactly what NFF is. The scale of attendees is around 10,000 people, with artists performing on a total of four stages. The ocean backdrop is absolutely stunning and the environment was surprisingly peaceful and calm, the antithesis of Firefly (lol sorry Firefly but you were cray). There are still two more days left, but I could hardly wait to talk about the festival to someone other than my family and friends, so voila. 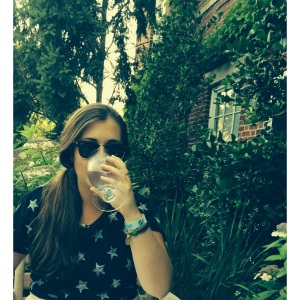 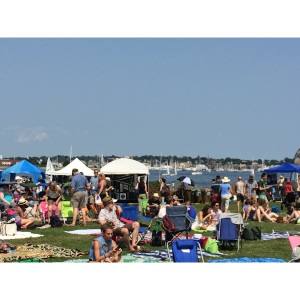 The headliner of the night was Ryan Adams, but for me the star was Jenny Lewis. She was absolutely phenomenal and sounded amazing live. Her outfit was pretty quirky and bizarre (a cape and Willy Wonka-esque glasses) which made me love her performance that much more. She began her set with her latest hit “Just One Of The Guys” and “Silver Lining” from her days with Rilo Kiley immediately following. I was sincerely hoping she would play “Silver Lining” but didn’t think she actually would, so that was an awesome surprise.

I attended the festival with my sister who I hardly get to see, so that has been very nice. It has just been really incredible so far and I cannot wait for what is to come. Tomorrow- Jack White. P.S- Only true followers of KersCorner will realize that I am wearing my signature festival hat in the picture below. Reduce, Reuse, Recycle. My motto.