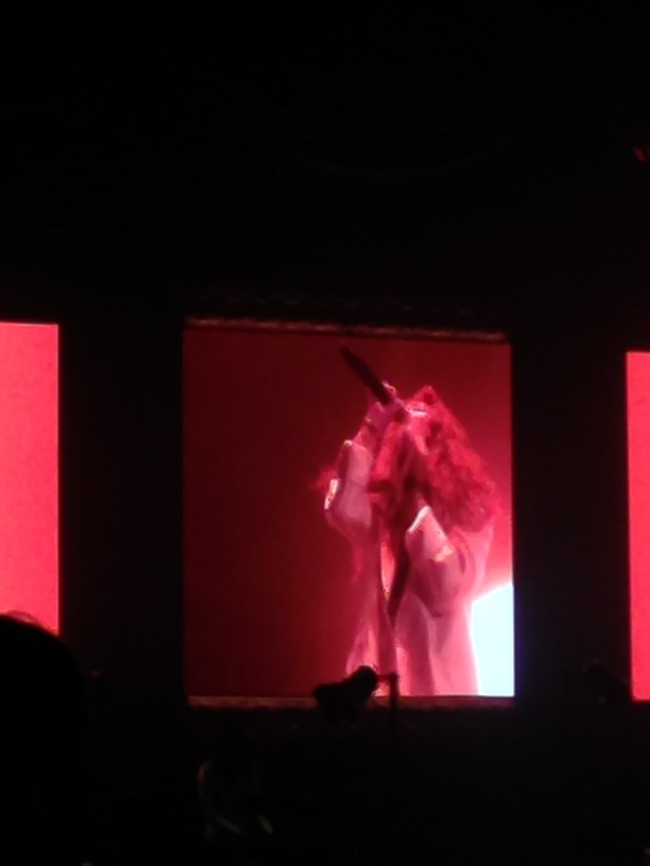 I have been anticipating writing this post for a while now, but obviously I needed to attend the concert first in order to write a review about it… anywho, the moment finally arrived and I was privileged enough to go to Lorde’s concert. It was absolutely incredible in every way possible. So here we go.

The concert was about an hour away from my house, but I had to pick up my friend which added an extra forty-five minutes to my commute. Since the doors opened at 8, I scheduled my departure so we would arrive at about 7:50. BIGGEST REGRET OF 2014. That may be a slight exaggeration, but not really. I completely underestimated how many people Lorde has inspired and reached through her music. We had general admission tickets, which essentially means that the whole bottom floor is half open and half filled with seats. So, it is basically like the Hunger Games, people fighting for spots closest to the stage. Elbows are thrown. When we arrived, I had no idea how long the line to get in would be. It was backed up for about five blocks, which really surprised me at the time, but I now realize is completely logical. Lorde is truly incredible and it’s obvious that her fans are this dedicated.

Once we got inside, we found a coat check. Hahaha I’m sure none of you care about that but I really felt I needed to include it because my friend and I were so pumped that we didn’t have to carry around our coats the whole night. I digress. The moment leading up to the opening artist is always the second worst time during a concert, behind the moment waiting for the main act to come on. The room was buzzing and filled with anticipation. People were cheering and chanting as soft music played in the background. Finally, Lo Fang came onstage. He was incredibly cool, much cooler in person than I anticipated. I have listened to Lo Fang in the past, but in concert you are able to hear him talk and get a sense of the cool vibe he gives off as both a person and musician. What was really cool about him was that he plays the violin in almost all of his songs, which in my opinion, is such a cool touch. It’s interesting to listen to because there is an underlying contradiction between the traditional and classical association with a violin and the new, electric-related way in which he was presenting it. He also incorporated string plucking into one song which sounded so so so cool in person. His voice is really neat and overall he was a great start to the show.

Then the moment everyone had been waiting for arrived. The lights dimmed and out walked the Queen B herself. What was so refreshing to see was that she just kinda strolled out onto the stage before anyone could even realize what was happening. No big arrival, no light effects, no smoke, she just strolled right on out like she was arriving at a friend’s house. She was wearing this white pants suit which I thought was a cool contradiction to her usual dark attire. Right away she launched into Glory and Gore, an interesting song choice to start the show, but it was incredible.

Everything I expected to comprise a Lorde concert was there. Amazing vocals, lights and smoke, and a lot of twitching/dancing (her twitchy dance is so much better in person, I think I shed a tear). Her voice and vocals sounded better than the actual record, I kid you not. I know that sounds crazy, but in person, her voice was more powerful and mesmerizing. One thing that I thought was interesting was that she did not talk a lot at all and when she did, she was hard to understand because she mumbled (plus she has an accent to us Americans). But this did not bother me in the slightest, in fact, it made me like the concert that much more. Everything you have ever heard of Lorde in the news or on TV is exactly the same as how she is in concert. She is passionate about music and her songs, that’s that. She recognizes that and, thankfully, does not feel the need to add a bunch of showy extravagances. At the end of my show I texted my other friend to tell her about the show and she asked what her performance was like and when I told her, she said she thought it was interesting that she didn’t really put on a ‘show’ so to speak, and asked if I thought she would change in the future. To this, I wholeheartedly replied, “I hope not.” Fans love Lorde because she does not feel the need to put on this superficial persona, and you could sense that in her show and in the response from the crowd. So maybe she just stood in one spot for seventy minutes and put her heart into her music. In no way is that a bad thing.

The most she spoke all night was when she spoke about the writing process for the song Ribs, which she wrote last February (P.S. since I know you’re all wondering, Ribs is, in fact, my favorite Lorde song- so I would like to think she chose to speak about this song for me, because obvi, like why wouldn’t she… kidding…. maybe). She said she doesn’t like talking about the meanings behind her songs, but she likes to tell the story of this one. She wrote it after she (even though she blamed her sister) had a party at their house. She said it got a bit out of hand and people were stealing stuff from her freezer (lol) and it was just a crazy night. At the end of the night she was exhausted and overwhelmed. She said she was lying in bed with her best friend (who I presume to be her boyf James) and he could tell she wasn’t sleeping and he asked what was wrong. To which she told him how she was realizing how truly frighting it is to grow older and experience this sort of crazy and surreal life with one foot in a world of normalcy and the other in this unnatural celebrity world. She said that writing this song was her way of putting words onto a paper that she could read and sing and feel comfort from as she embarks on her journey through this crazy life.

Before this concert, I really was inspired by Lorde, loved her music and was excited about her as a refreshing musician for our generation. After this concert, I still feel all of those, but to a higher extent. This was one of the best concerts I have ever been to in my entire life and I have been to my fair share of concerts. Also,…. wait for it….. I got a tshirt. WOOT. I think that may actually be the most exciting part at the end of the day (kidding). I wish I could elaborate more on why this concert was so incredible, but it’s something that can be described, it needs to be experienced.

No encore, girl doesn’t mess around.