Prior to your solo career, you were a member of Boston-based band Gentlemen Club. How do you feel your experiences in a successful band have influenced you as an independent musician?

Lol the band name was “Gentlemen Hall” not Gentlemen Club. Anyway, my experience in that band was vital to bring me to where I am now. I guess you could say we went through the wringer that is the music industry. But more importantly, I acquired a lot of skills that made it possible for me to do this on my own. I feel blessed to have had all of the opportunities and experiences that we had.

Being from Minnesota, how did you end up in the music scene in Boston?

I attended school in Boston for two years and that is how I met the guys that became “Gentlemen Hall”. We started out playing basement parties and clubs and eventually that led to national tours and a few lucky breaks.

During your career you have had the opportunity to play alongside many reputable musicians including One Republic, Young The Giant, and Beyoncé. Do you have a moment or moments that were particularly memorable? 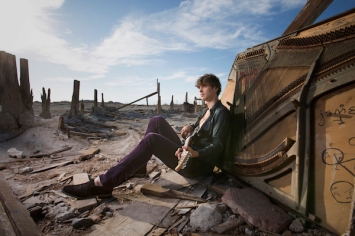 All the moments you listed are very memorable but opening for Young The Giant in 2011 definitely was a stand out. It was shortly after their first record came out and cough syrup had just gotten on the radio. Their live show was intimate and powerful and the songs were stellar. After seeing them play live, I became a fan. They are really talented, humble guys and I’m happy to see them getting bigger and better.

In recording your EP, you were able to work with many incredible people. This included engineer, Tom Weir, who has worked with artists such as Blondie and Willie Nelson. How do you feel working with such people impacted your recording process?

When you work with the right people things usually go a lot smoother. Tom Weir had the most impact on me simply because he taught me so much about engineering and has a great ear for mixing. This EP was very hands on for me and was the first time I produced and mixed my own material. So it was great to have Tom there to help out whenever I’d hit a wall.

The music video for “Walk Through the Fire” is very artistic and bold! Where did the idea behind the video stem from?

The idea behind the video for “Walking Through the Fire” stemmed from the lyrics. I knew I wanted my friend Jacob Stein to produce the video. He has done some amazing work and he knew two great directors, Adam Villasenor and Reza Ghassemi, that wanted to get involved. Together we talked about what the lyrics meant to us and started throwing ideas around. Within a few minutes we had the concept of a man walking through the desert having hallucinations. Each hallucination would represent a different metaphor–sexual, physical, spiritual, and mental challenges that lead to finding one’s true self. This idea jarred a memory of a dream Adam once had of a ballerina, a boxer, a burning bush, and a chess player, so naturally we incorporated all those things in the video.

The EP was recorded in interesting locations such as Alma Studios in Ireland, Studio City Sound in California, and your bedroom! Why did you end up recording in each of these locations? How do you feel each of the locations added to the EP as a whole?

I went to Ireland in 2014 to work with my friend Mia Fitz. When she heard “Walking Through the Fire” she had a lot of great ideas for the arrangement. She has a great ear for hooks and contributed greatly to the song. Alma Studios is her home studio. That was my first trip to Ireland and working with her there is a fond memory.

Studio City Sound is Tom Weir’s studio. It’s not far from where I live. A friend of mine introduced me to Tom around September of 2014. After meeting him and seeing his studio I asked if he’d be interested in taking a stab at a mix for me. One thing lead to another and I ended up recording there for the next few months because I loved working with Tom so much.

My home studio is where I do most of my songwriting and recording of my demos. I often use a lot of my home production and go to a place like Studio City Sound to record final vocals and live drums.

Who are your favorite artists at the moment and what are you listening to?

Kendrick Lamar is probably my favorite artist at the moment. Its because of his lyrics and delivery that I have such an appreciation for him. I’ve also been getting into Major Lazer’s latest record. There are some burners on that album.

Thank you for answering some questions! Do you have anything you would like to add?

Huge thank you to the supporters of artists all around the world!