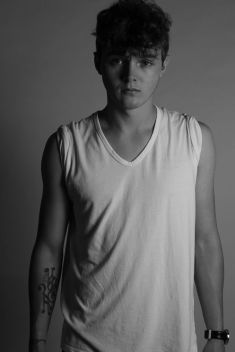 Nineteen year old Austin Kolbe has been playing music since a very young age. Starting with traditional instruments, such as trumpet, and later moving on to more contemporary instruments like bass and drums, the singer/songwriter utilizes his wide-ranging understanding of music to create exactly what he imagines. Using his personal experiences as inspiration, Austin is providing the world with truthful, exquisite music. Austin recently released his first single, “Lips” for London Tone’s 52×52 launch campaign. Based on its reception, the best is yet to come.

You just released your debut single, “Lips.” How has the reception been?

I couldnt be happier with the reviews its been getting. The reception has been really great and were seeing more and more new faces at the shows.

What can we expect from your debut album?

I think its going to unveil as something even I wont be able to expect; Showing both my risqué side along with my deeper side, and its all done with live musicians, like I believe it should be. If you cant play it on an instrument, it wont be on the record.

You’ve listed Prince as your biggest influence. In what ways does he influence you?

Not only has he opened up my mind musically, but he is the definition of what I believe every artist should strive for in terms of musicianship, taking risks, and being true.

Who are some of your other influences?

Anyone who shares the love for fire and groove. I can be under the influence of more than just someone in music as long as they put themselves on the line and drive me to do the same.

What was it like working with music producer and engineer, Eric Lilavois?

I couldnt have asked to have been gifted with a better producer. He’s the only person i’ve met that I think has a understanding of who I really am. We come from a similar mind-set and thats why I think we work so well together.

If you could play any show in the world, which would it be?

Coachella. I see my band and myself on one of those stages soon. The people there are like no one else. I’d be able to give them a really great time, something memorable.

You’ve played many instruments throughout your life. Which instrument is your favorite to play? Which was the most challenging to learn?

This is hard one. Its like asking whose my favorite relative. But, I feel the most free when I play my strat, and I feel its the most challenging, because theres so many different sounds you can get out of a guitar and you’re constantly growing and learning new tricks. Although thats the same with all instruments.

Your lyrics are very truthful. What are some things that inspire you to write?

I only write from experience.

What do you want to accomplish over the next five years?