About four years ago, Kenny Vasoli of The Starting Line headed a new creative project, Vacationer. Based out of Philadelphia, the Nu-Hulu music project has rapidly gained followers around the world. Over the past few years Vacationer has toured with well-known bands such as Bombay Bicycle Club, Tennis and The Naked and Famous. The group recently performed in Philadelphia with Bleachers, the alternative music project of mastermind Jack Antonoff of FUN. Vacationer’s second album, Release, serves as a celebrated follow-up to their successful debut album, Gone. Now having spent sufficient time collaborating creatively, the band is moving forward in bringing positive, relaxing, and euphonious music to the masses. Kenny took the time to answer a few questions for me, here is what he had to say:

Kenny, you have been associated with a multitude of bands with very different sounds. What has it been like creating music with different musical approaches and artistic visions?

It’s completely natural for me. I always follow my instincts and honor my influences, both old and new. I have more trouble trying to stick to one sound. I compare it to getting all of my food groups, I’d feel malnourished by only playing one specific type of music my whole life.

Relief, the band’s second album was released this past June, right at the start of festival season. Is it exciting to release an album and immediately get to tour it? How do festival performances differ from venue shows in this sense?

It’s nice getting to play festivals, we’ve had some amazing moments being a part of those this summer. It’s a thrill to be billed along side some of my favorite bands, even heroes at times. I’m always excited to play new songs, it’s like a freshly prepared meal that we are proud to serve. What I like so much about club and theater shows is the understanding between us and the audience. Most of the time when people see us in a venue they have an idea of what they are getting in for, so the ice is already broken.

Sonically, Relief differs from the debut album, Gone, in that Relief almost sounds more relaxed and simplistic, in a positive way. Yet, the growth between the two albums appears very organic. Can you discuss the creative approaches to each of these albums?

We took a very similar approach to this record from the last one. I think our biggest motivation was writing songs that we’d enjoy playing live. We’d played so many shows off of Gone, we could see where our set lacked energy. We added a bit to the writing dynamic with contributions from the live band, those guys are amazing players and have great sensibility so it’s nice to trust them with their parts. We also had a lot of ensemble recording sessions; I believe we had strings, winds and brass come in to track.. even an opera singer on Parallels.  We wanted to make a record that went deeper both sonically and in subject matter. I’m very pleased with how it turned out.

You’ve described your sound as ‘relaxed,’ which certainly comes across (in the best way possible)!  What do you hope listeners take away from the music you create?

Relaxation and relief are the big objectives with this music. I want people to be happy and put their worries away when they listen to our music. I find stress to be a burden, and it falls upon me too easily. So I’m the poster boy for why this music exists, I need a pronounced reminder to chill out and enjoy life.

Gone is an incredibly unique album. The songs are very detailed, and because of this, actually expand over many genres. There is texture, tropical accents, soulful vocals, dream pop keyboard; the list goes on and on. How do you hone in on and finalize an end goal for a song when there are so many possible routes to take?

Between me and my collaborators, we have so many influences. Often times we’ll expose each other to our influences for the first time during a writing session. We really just follow our instincts and trust each other when we a re completing a song. If one of us is dry of an idea there is almost always someone who can offer one. It kind of becomes a relay race when one of us loses steam at the writing board. Often times when we are excited about  new song, the synapses fire between all of us and it is complete in what seems to be no time.

You have toured so much over the past few years with many different people in different places. How are you going to spend your time off?

I lead a very simple life with simple pleasures when I am home. I love to spend time with my dog, hiking and skateboarding along side him as he trots. This past summer, I picked up surfing and am slowly becoming obsessed with it. I cook for myself almost every night when I am home. I enjoy hunting for records, meeting friends to hang out or even play more music. I also frequent the occasional dance night if there is a good party going down.

I admire your ability to incorporate traditional instrumentation alongside electronic additives. What inspired this?

That was an objective from the get-go with this project. My favorite bands were (and still are) ones who could utilize analog and passive instruments along side modern electronic production. E.i. Radiohead and LCD Soundsystem. I was also attracted to the stand alone artist who could create electronic music from natural sounding instruments, namely Four Tet. That was really what led me to find Matt and Grant from Body Language. They produce Vacationer with a background rooted in jazz and classic electronic music. I came to them with my own garage/rock band experience, but I had a vision of a chilled out result. The dynamic between all of us is responsible for the Vacationer sound.

There is a line in your song “Onward & Upward” that goes, “in a movement I found relief.” The way it is presented vocally, musically, and lyrically seems to almost capture the entire essence of the album. Are there any songs or moments that you feel have really captured all that is Vacationer?

I like to site that song as a solid representation of the new album’s message. Relief is readily available if you know where to look. I’ve found a sense of relief both in the band and in myself. Now I just want to spend the rest of my life experiencing it.  That’s the song that encapsulated it most recently.  Near the start, I’d say that the song Trip filled that role. That was the song that really lit the bulb, I could see clearly what this project was growing into.  Not long after we Trip, we named the band Vacationer.

You’ve stated the music you create falls under the genre “Nu-Hula.” Would you mind elaborating on that?

That came from jokingly spouting off genre names at a recording session. I remember we were recording No Rules and Grant was dancing with hula hands.  He then exclaimed, “it’s Nu-Hula!” We took to it right away.

What can we expect next from Vacationer?

We’ve got some more touring to do off of Relief. At the start of next year we’ll be making our way to the warm weather states down south for some shows. Come spring/summer we’ll be aiming for as many festivals as we can.  In the meantime, we’ll be laying down sketches of new songs. Releasing this last record seemed to make me more inspired to write, which is a-typical. Usually I have a long lasting hangover and need to replenish inspiration. This time around I’m chomping at the bit to write new and exciting music.

…where I just want to sit and breathe and reminisce. 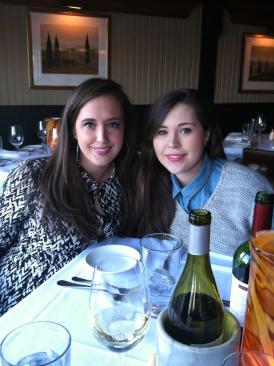 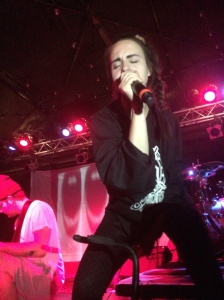 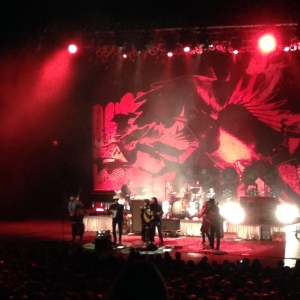 I don’t know what this is. 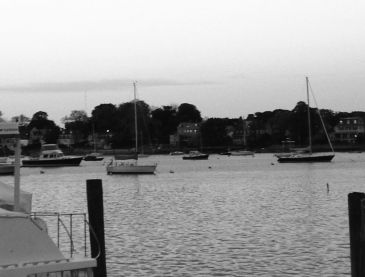 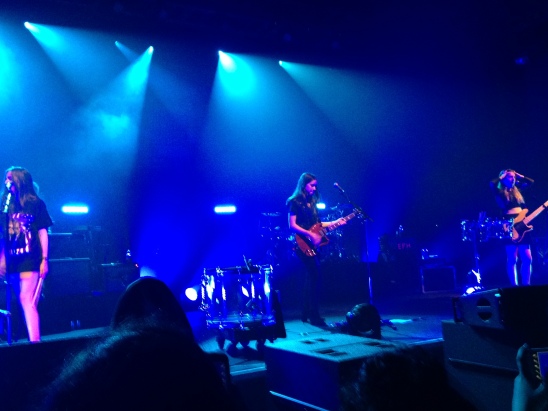 I had been waiting patiently for the HAIM concert for an extremely long time, and I can’t believe the concert has already come and gone. I know that I have raved about all of the concerts I have attended recently but this concert exceeded my expectations. I’ve heard with frequency how amazing the sisters are live, and they certainly proved that to be true.

Tennis opened for HAIM, which I was very excited about. I love their music and think they are very talented. Unfortunately, the music was significantly louder than the vocals. One interesting things that happened was when Alaina told a story about how she was stuck in traffic on the way to the venue and desperately had to use the bathroom, and when she asked where the bathroom was, the man pointed to a restroom which only had a urinal in it. He apologized and said that had been the bathroom for the last forty years. Alaina used this story to emphasize the power of women in music and the necessity for more. She discussed how musicians like HAIM are making that idea a more prominent and accepted one. I thought that was an extremely awesome story/message to tell (even though the story revolved around a bathroom…..).

When HAIM finally came to the stage, I couldn’t quite wrap my head around the fact that I was actually seeing them live. Their mom is from Philadelphia, and was at the concert. They talked a lot about the fact that she was from there which lead them to have a connection to Philly. The energy that radiated throughout the venue was unlike anything I had ever experienced at a concert before. The girls killed it. Whether they were singing, jamming, or shaking a maraca, the passion and love they put into each song was palpable (was that super cheesy?). Este and Alana have constant banter that is entertaining and enjoyable. 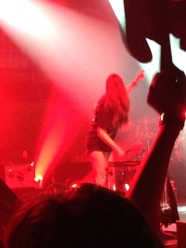 Danielle kills it with her incredible guitar licks and solos. At one point, they performed their cover of XO by Beyonce, in which Dash played the guitar and Danielle played the drums. It was absolutely amazing to see in person how truly talented the girls (and Dash and Tommy) are, as well as their versatility. One of the things I was most looking forward to was the drum circle-type jam they do at the end of each show. Not to continuously say, ‘it was just so amazing,’ but it really was. No words I could say could properly convey the experience of all that is a HAIM concert. I have heard their cover of “Oh Well” a million times, yet was still blown away. To say the least, this is a concert I will never forget, one that probably won’t be topped for quite some time.

Love this song, so excited to see them with HAIM next month!